The Tourism Industry Association of Canada is the only national organization representing the full cross-section of Canada's $90 billion tourism industry.

CHINA ADS Program Generates $3B in Export Revenues in First 5 Years
posted on May 26, 2015 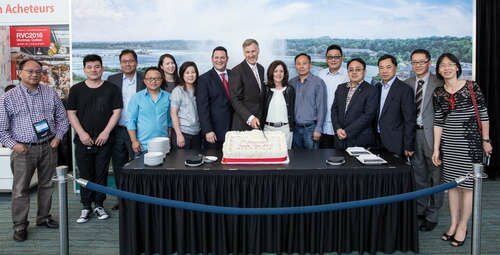 NIAGARA FALLS, ON, May 26, 2015 - Today, the Honourable Maxime Bernier, Minister of State (Small Business and Tourism) (Agriculture) joined with the leadership of the Canadian tourism industry to celebrate the 5th anniversary of Canada being granted Approved Destination Status (ADS) from China. This agreement allows Canada to actively market its tourism products in China and authorizes Chinese travel agencies to market and promote leisure group tours for travel in Canada.

Since the historic agreement in 2010, Chinese tourism to Canada has grown at an astounding rate of 24% per year generating $3B in export revenue. In 2014 year over year growth in visitation from China reached 30% with over a billion dollars in receipts.

"The Government of Canada recognizes that tourism is a significant growth driver for our country's economy. Approved Destination Status played a major role in increasing the number of visitors from China, which is one of our highest performing growth markets. We will continue to promote our country in China through the innovative marketing efforts of the Canadian Tourism Commission," said the Honourable Maxime Bernier, Minister of State (Small Business and Tourism) (Agriculture).

Canada also ranks as the top destination for Chinese traveller satisfaction. This ranking is a testament to the quality of experiences offered in Canada as well as the significant Chinese-Canadian population, businesses and infrastructure which allows our Chinese visitors to feel at home and at ease in Canada.

"The Chinese tourism market is a tremendous success story that combines exceptional Canadian tourism product, effective marketing from the Canadian Tourism Commission and positive changes on the part of the government to simplify and expedite visa processing," stated Charlotte Bell, TIAC President and CEO. "TIAC is proud to play its part in this success story by providing certification under the Canada-China Inbound Tour Operator Registration Program which provides a list of approved operators to receive tour groups from China."